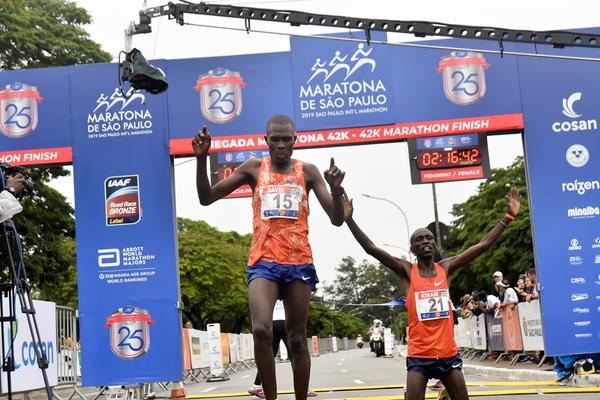 Considering the decree of the Governor of the State of São Paulo and the determinations of the Mayor of the City of São Paulo, as well as recommendations from the competent public agencies and the current scenario - suspending, postponing or canceling events with agglomerations in the City, State and Country, as well as in several countries - we inform that the São Paulo Marathon - 2020 - São Paulo Marathon, as announced, has been transferred to the second semester.

After agreements with the City Hall, through the Sports Department, the race will be held on November 2, Monday, a national holiday. This care was due to the event involving several areas of the city, having an expo open to the public and the participation of athletes from various countries who visit Brazil and the City.

It is worth mentioning that the registrations are still valid. The route is maintained, starting at Pacaembu and arriving at Ibirapuera, and will start earlier, providing better conditions for the performance of athletes and adaptation to the dynamics of the city.
The organization, observing the determinations of the Governor of the State of São Paulo and the determinations of the Mayor of the City of São Paulo, as well as recommendations from the competent public bodies, is attentive to these movements, prioritizing the well-being of its athletes, collaborators, providers services, entities and people working for sport.

Updates will be published as soon as possible on the Marathon website, through our press office and on Yescom social media. 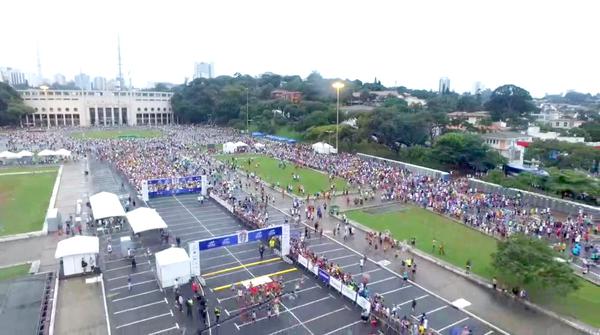 The organization is already in contact with the City Hall, through the Sports Secretariat, for the definition of a new date, scheduled to be announced until March 17th. This care is due to the fact that the event involves several areas of the city, has an expo open to the public and the participation of athletes from several countries that would visit Brazil.

It is worth mentioning that Yescom will comply with their determinations and is attentive to these movements, prioritizing the well-being of its athletes, collaborators, service providers, entities and people who work for the sport.

Updates will be published as soon as possible through our press office and on Yescom social media. 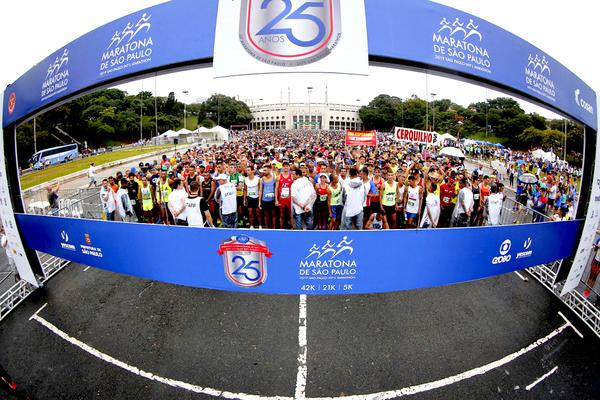 “The acting mayor of São Paulo, Eduardo Tuma, at the request of Mayor Bruno Covas, determined this Friday afternoon (13), the cancellation of all mass events with more than 500 people, after an increase in coronavirus cases in the city. Governmental, sporting, artistic, cultural, political, scientific and commercial events with a close concentration of people are suspended in the city of São Paulo. The City also recommended that private events be avoided at this time. The measure is being adopted indefinitely to prevent risks of direct transmission of Covid-19. ”

It also determined the Governor of the State through a note published in the press at this time,

“Classes in São Paulo's municipal and state public education will be suspended as of Monday (23), informed the municipal and state education departments. In addition to classes, sports, music, leisure or other activities for over 500 people are also suspended, informed São Paulo governor João Dória. As of next Monday (16), guidance will be given to students and families on how to behave on those early vacation days. According to the Minister of Health, Luiz Henrique Mandetta, it is not for students to stop going to classes to be close to the elderly, the group considers it a risk of contagion of the coronavirus ”.

Therefore, we suspended the registration of the São Paulo Marathon - 2020 - São Paulo Marathon, awaiting the official communications and / or decrees of the competent public bodies, which should happen in the next hours with the measures to be taken, technical determinations for events of this nature , change of dates and procedures.

It is worth mentioning that Yescom will comply with their determinations and is attentive to these movements, prioritizing the well-being of its athletes.

Updates will be published as soon as possible through our press office and on Yescom social media. 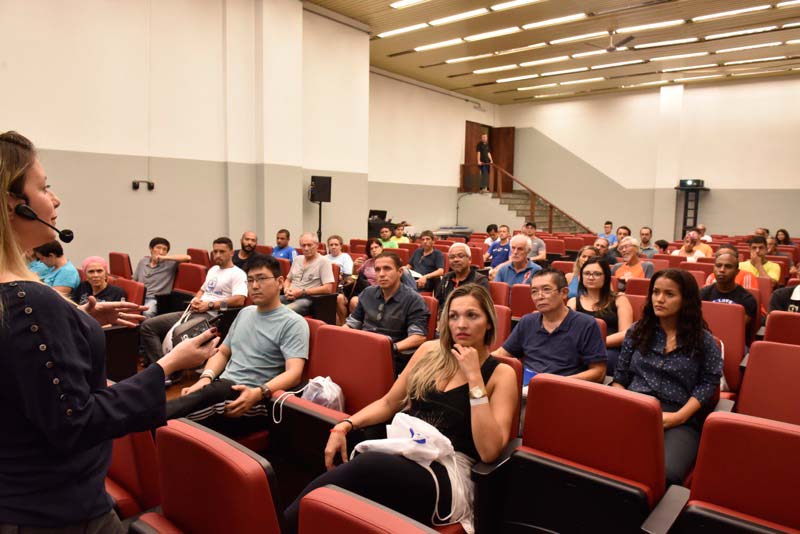 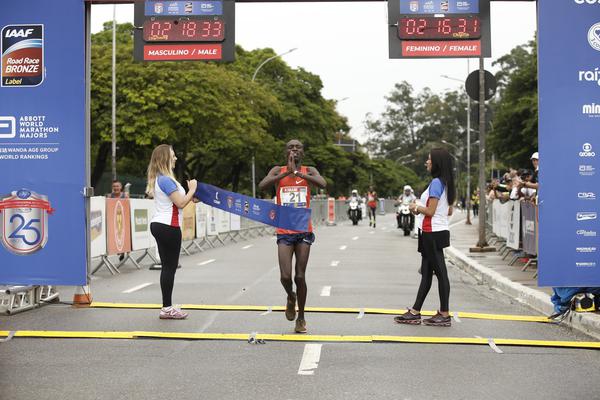 São Paulo (SP), 04/04/19 - On Sunday (7), Kimani Pharis Irungu, a Kenyan athlete with bronze medal in the IAAF ranking, was the winner of the 2019 São Paulo Marathon after completing the 42km in 2:18:32 sec. Ethiopian Sifan Melaku Demise, who is a gold athlete in the ranking, won the women's victory, with the time of 2h35min03sec. The two African athletes made their debut in the São Paulo Marathon race, with a great result, and intend to return in 2020, even though they felt a bit the strong climbs of the course.

A race with intense pace and pulled, and that had several climbs that required a lot of athletes, as well as new developments on the course, due to the changes requested by public agencies, a hot day and high humidity, a little drizzle at the start and arrival and that ended with the podium totally dominated by foreigners, both in the masculine, as in the feminine. Thus, the 25th edition of the International Marathon of São Paulo can be summarized.

Kimani and Sifan were among the elite foreigners of the gold, silver and bronze rankings. The competition was attended by high-performance runners and representatives from nine countries: Brazil, Eritrea, Tanzania, Kenya, Serbia and Montenegro. , Uganda, Morocco, Peru and Ethiopia.

The 35-year-old Kenyan, who made his debut in the São Paulo Marathon, used the strategy of saving himself at the beginning and then trying to pull a stronger pace. A squad of about six athletes began to clear away the second group and set the pace. Kimani was among them, along with compatriot David Kiprono (who finished second) and Ethiopian Feleke Darsema (who finished third). The three of them came together until almost the end of the race. Already on arrival at Ibirapuera, Kimani forced more and opened a small advantage, to cross first.

"It was a difficult test. With very strong climbs and high-level opponents, so much so that we come together all the time, always taking turns leading. Besides the climbs, I also felt a bit wet weather, more than I am accustomed to. The biggest difficulty was in the steep stretches, which took a lot of people. I'm happy. It's a great result, especially because it's my debut in the race, "celebrated the winner.

At age 19, Sifan Melaku Demise also made his first appearance in the São Paulo Marathon. Contrary to the men's test, the young woman set a stronger rhythm at the beginning, and after she opened her competitors' lead in the middle of the competition, she began to manage the dispute. She crossed the finish line on her own, and with an advantage over two minutes for second place, Kenyan Salome Jerono Biwo. Genet Getaneh Wendimagegnehu, another athlete from Ethiopia, was third. The Ethiopian Sifan did not know the route, and emphasized that the climbs were the most difficult points.

"It was a tough test. I felt a lot of strong climbs, where I saved myself more. But when I was able to open an advantage to my competitors, I began to manage, even to tire less and save a little. It was a tiresome race, but I'm very happy with my first victory here in São Paulo, "said the young woman.

In the Half Marathon, winning couple is united by the races

In the dispute of the Half Marathon, with distance of 21 km, the pair Leonardo Santana de Olinda and Alice Yuri Lima Fonseca celebrated the victory in double dose. The two have been dating for four years and, whenever they can, participate in the exams together. The taste for athletics and the search for the same goals end up uniting the couple even more. On Sunday they were able to celebrate yet another great result, their victory in the men's and women's in the Half Marathon race, (distance of 21 km).