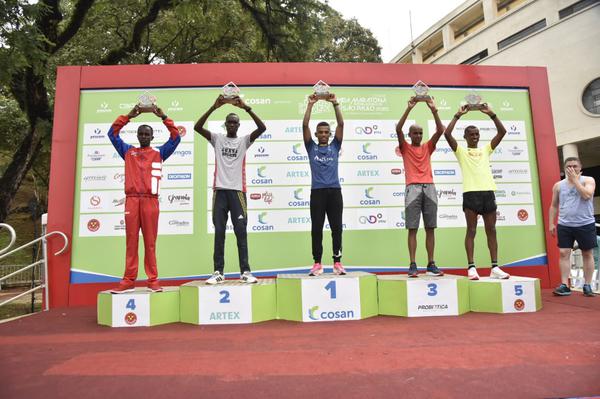 After four years, Brazil returned to the top of the podium in the 14th edition of the São Paulo International Half Marathon and with a beautiful victory by the young Daniel Ferreira do Nascimento, 22 years old. This Sunday (2), the runner, born in Bragança Paulista (SP), imposed a strong pace since the start, closely followed foreigners and then started to lead, opening distance for competitors. Completed in 1h04min34s, best time of the dispute since 2015, and also secured the index for the 2020 Half Marathon World Championship, in Poland.
The last Brazilian victory had been in 2016, with Giovani dos Santos. Nicolas Kiptoo Kosgei, from Kenya, came in second and Gilmar Silvestre Lopes, also from Brazil, in third, completed the podium in this 14th edition.
Among the women, Kenyan Janet Cheruto Masai, 28 years old and debutant in the race, took the best by completing the course in 1h16min55s. She had already been third in Volta da Pampulha and seventh in São Silvestre, both in 2018, and came as a highlight among foreigners.

The rain forecast was not confirmed this Sunday morning and the approximately 7500 athletes had an ideal climate for the challenges of 21,097 meters, in a fast, more linear and technical route.

At 22, and with a history of overcoming and persistence, Daniel Nascimento comes in an ancestry. He left the cane cutter job and has stood out in the street racing scene. He was the best Brazilian in the last edition of the International Race and São Silvestre, with the 11th position.

This was his second race in 2020 and his second victory. He also won the Brazil Cup of Cross Country, in mid-January, in Espírito Santo. The results motivate the young person to face the challenges of the year.

“I am very happy with the result. I am practically returning to the races, since last year, due to difficulties, I abandoned the disputes, I was stopped for four months. At the end of the year, I ran to São Silvestre and was the best Brazilian. 2020 started very well for me. This is my second test and the second victory. I hope it stays that way, ”said Daniel.

The first place in this event, which is one of the main events on the calendar, brings another reason for the São Paulo celebration. The time of 1h04min34s made him reach the index and qualify for the World Half Marathon, which takes place in Gdynia, Poland, at the end of March.

“I came thinking about making time to qualify and I had the idea of ??being in the top five. And the result came, I got the index and I still won. It's too good ”, celebrated the athlete who was very excited when crossing the finish line.

At 28, Janet Cheruto can also celebrate. He made a great debut in the São Paulo Half Marathon, winning the victory in a serene manner. The Kenyan maintained a good pace throughout the dispute. Up to half of the race, she was accompanied by four other athletes, including two Brazilians, but later she managed to open some distance for her rivals and knew how to manage.

“It is my first time in this race. I am happy with the victory. It was a smooth race, a good course. Difficulty just to stay ahead of the competition. But I really liked it, ”said Janet.

The Brazilian Rejane Ester da Silva, with the second place, and the Ugandan Emily Chebet, in third, completed the female podium of the 14th edition of the race.

Rejane, who was the best Brazilian among women, highlighted the good level of the athletes. “I think it was a very nice race. I want to congratulate the organization. I started well, and I was able to accompany foreigners for a while. Then Janet opened it, and then it was difficult, even so, I tried to do my best so that she didn't get too far. I'm happy with the second place. And the good thing is that the year is just beginning ”, said the 36-year-old athlete.