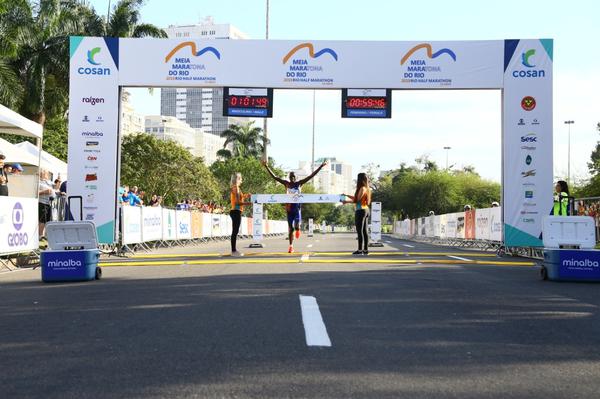 A sunny sunday in the winter carioca. With a mild temperature of around 24 degrees, Kenyans Stanley Biwott, male, and Esther Kakuri, female, won the 23rd Rio de Janeiro International Half Marathon, which features one of the most beautiful courses in the world. While Stanley competed for the first time, Esther secured the third championship in his third consecutive appearance. The best placed Brazilians were Giovani dos Santos and Rejane Ester da Silva, from the Elite Runners Usb Team, who came in fourth place.
Newcomer to Rio, Stanley Biwott had a duel with Ugandan Fred Musobo and Kenyan William Sitonik within 15 kilometers of the race. From then on, Stanley set off at a faster pace, took advantage of his opponents and crossed the finish line with a time of 1h01min49sec, the sixth fastest time of the 23 editions and the 14th Kenyan victory.

“The final part of the race is very stressful because of the numerous curves of the course, which breaks the pace a bit,” said Stanley, 33, winner of the New York and Paris marathons and who made 1h01min43sec at the Luso Half Marathon in Lisbon last year. Stanley, who considers Rio a “very cool place” competed in the 2016 Olympic Marathon, but did not complete the race. The difficulty in pace was the result of the necessary changes in the route due to the ban on Niemeyer Avenue.

Rio Marathon Champion 2019, in June, Giovani dos Santos proved why he is one of the best Brazilians in the background. The miner finished the International Half Marathon in fourth place with a time of 1h04min42s. At 38, the athlete from the city of Natércia did not hide his emotion.

“I could almost look for third place, maybe a little more speed. The test, for me, was especially difficult due to a cold since Wednesday. Due to these circumstances, I can consider the result very good, ”explained Giovani, who praised the course of the race. “With the changes in the starting place, the route became faster. But it was a windy day, which wears a lot, ”he added.

For the third time in the Rio Half Marathon, 25-year-old Kenyan Esther Kakuri improved her time from 2018 by 1min50s and secured the third championship with a time of 1h16min52sec. “It is very important to keep this regularity in a race. I am happy and already with plans to return next year. I always come prepared to do my best, ”said the runner, who will have the next challenge at the Buenos Aires Half Marathon next Sunday, in which she was third place in 2018.“ This time I go to Argentina to improve my result "

Already the Rio de Janeiro Rejane Ester da Silva, celebrated its 35 years, completed on the 11th, making a test of overcoming. “I trained a lot for this dispute, but yesterday (Saturday) my right heel swelled. I woke up crying, hardly came, but my family gave me a lot of strength not to give up. I didn't even know if I could complete the test. I just have to thank God, ”he said. “It's a very strong test. Last time I stopped in the middle, I couldn't stand it, but despite all the adversity, now I managed to be on the podium, ”he added.

** In the same race was the IAAF Half Marathon World

The Rio de Janeiro Half Marathon is a realization and organization of Globo and Yescom, with promotion and broadcast of TV Globo, Globoesporte.com and special support from Rio's City Hall. The sponsorship is from Cosan and Raízen, with co-sponsorship of 3 Hearts and Minalba Support is from Two Brothers-in-law, Probiotics, Montevideo, CBN, Camphor Blessed, Green Field, Sesc, Espaçolaser, Madrugão, Rituaali, White Eagle, Nutraer and GuaraMega. The supervision is from IAAF, AIMS, CBAt and Farj.

You can search and download your finish line photo from the 2020 Rio Half Marathon - Meia Maratona do Rio.

You can search and download your finish line video from the 2020 Rio Half Marathon - Meia Maratona do Rio.